Cognitive bias - When your beliefs get in the way of reality...

I was on last night and heard a *LOT* of moaning about cheaters. While there were cheaters on last night, what I found interesting is that some people who were accused of cheating were, in fact, not.

This got me thinking of a post I authored a while back regarding attributes that go into gaming. In this vein, I thought I'd re-post my article here.

For those who look at this and think TL;DR and feel the need to say so, your comments are not really necessary as it only placing emphasis on how some are an indictment on the education system.

FYI: I'm an engineer and love data, analysis & interpretation. It was curiousity that led me to do some basic research into the topic below.

If you feel like contributing to the poll, please do so. If you feel like lying when you submit your poll numbers, then you are most likely one of the cheaters that people talk about... (think about it

). Perform the reaction time test five times and post the average in the poll category...
Original POST on the TOG forums: April 23, 2017 (with minor edits)
I recently heard a lot of whining on the TOG AAPG server regarding people who "don't miss" so they much be hacking to "I shot you first" or "Take a hit!"... So I thought I do some research on the topic as it relates to the human ability, both physical and mental.

Everyone thinks themselves a G-O-D at the game, with most people who call out others basically suffering from the ultimate in Dunning-Kruger (see first post).

Let’s take a look at a few key parameters regarding gaming, in no particular order:

I’ll present my argument and supplement with graphics and sources. I’ll also take the K.I.S.S. principle for our readers who would rather not be bored with the details.

There was a very simple experiment performed to ascertain reaction time as a function of age using nothing more than a yardstick. ( Reaction Time vs. Age )

They concluded that if you in the 14-24 age group, your reaction time is on average 35ms faster than someone in the 46-60 group and 20ms faster than those in the 36-45 group. So we conclude that the reaction difference is great enough that he who actually does shoot first will win, especially considering your ping time to the server, as the predictive algorithm calculates out the time differential between shots (note, time at this point, not accuracy, which is a different matter).

Two things are involved in accuracy. 1) micro-muscular movements, which tend to get more macro as we age (you don’t see a lot of *OLD* brain surgeons still performing do you?) and 2) tracking an object…

Best way to test these out for yourself is to download this really cool program called “Reaction” ( reaction speed test ), which will humble the [TOS Violation] out of you… ha ha. It will show you not only how accurate you can follow a target, but the reaction time as the target moves around the screen… again, prepare to be H-U-M-B-L-E-D !

Here are my results...

If you don’t want to download the program; try, Human Benchmark - Reaction Time Test, which is for reaction time only.

There was a survey done for CS:GO using reactiontime, so it might be worth doing for this community to see how TOG does… I suspect “The Older Gamers” will bear out the conclusions of studies, if we are all honest on reporting the results.

I’m only going to discuss one topic here and that’s vision (any others could open a can of worms). As we age, our ability to see also deteriorates. In particular, floaters and glaucoma can be real issues.

In a nutshell, reaction time to light and dark increase at a rate of between 15-23ms/yr. The graphs suggest that a person at age 50 with glaucoma should expect an average of 100ms slower than a 20 year old (baseline only with a gap between 20 and 50, which is a shame, as it would nice to see an entire graphic for the full population). Basically, if you have glaucoma, get to your doctor.

Other things to consider with respect to vision are color-blindness, which might actually be an advantage in the game depending on the type of color deprivation a person suffers from. Again, big can of worms, but I thought it interesting as I’m going to experiment with using my shooting glasses to see if my gaming improves (they have six different lens colors I can choose from).

Another topic that could be included is arthritis, which I suffer from, but to be honest, it’s too broad of a subject to consider, so we’ll stick to the above only.

How sharp are your eyes? Two factors, contrast and acuity. We generally don’t worry about acuity as this is corrective via glasses, but what about contrast? 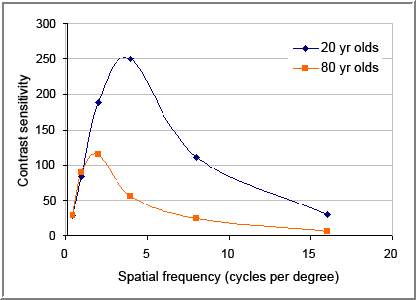 This has two components to it. In games, there are both audio and visual inputs. The main problem that most of us are not aware of is that the brain has to sync these together in order to make sense of them, and this costs time.

Bottomline is that as you age, your vision and audio inputs are not quite in sync anymore. Your ability to hear doesn’t change much from a frequency perspective (amplitude is compensated for by increasing the volume). Your vision is changed at two levels. 1) Contrast and 2) acuity, both which result in visual “lag”…

This is just scratching the surface of the problem, so next time you get pwned by an eleven year old, remember, your old fat-[TOS Violation] is playing the game up to 500ms behind him. That’s HALF A SECOND !

In life, there is no respawn... why should there be in a game?