LWOF_BrOkenArrow Posts: 371Player
October 2018 edited October 2018 in PS4
I get the tutorial is just meant to serve as a simplistic intro into basic gameplay, but I think it could be improved.
For starters, the Instructor's voice is low, like he's whispering through his headset/microphone. I know it's not my TV volume cause I can hear everything else, just fine. I actually believe this is some glitch with the audio as there's a brief moment in the tutorial where the instructor starts speaking loudly and clearly. I'm not saying I can't hear the guy, just saying his voice is a little soft and meek.
Also, it'd be cool if there were leader boards for the tutorial on the PS4 for fastest time completion. In this case there'd be a timer which would run as soon you'd go past the first gate. Where you grab your weapon. There could be achievements for beating the tutorial in a certain amount of time.

Also, I noticed how the x-ray objective in the tutorial looks much different than those on Sandstorm. I personally like the appearance of this obj better and I'd like it if this were used instead for search and grab game modes.
Upon completion of the tutorial, the Instructor tells the player to report to Sgt. Flax (or something like that) for further assignments. I believe this is hinting towards possible daily objectives or challenges which players could do to earn even more weapon skins and camos. I think this would keep things interesting for the playerbase in the long run. It's important to give players stars to reach for when trying to maintain a player base. Ranking up is not enough.

Here's a vid of the tutorial. 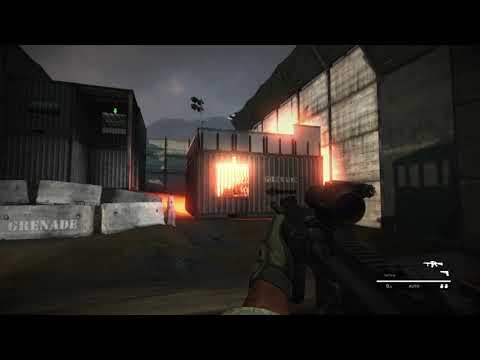 Notice the HUGE difference in volume at 3:27 when compared to the rest of the vid from the Instructor.
Army SROTC Cadet